An important part of our open development process are the nightly builds that make the latest beta and bug fix Controller firmware available for people to test. The Controller nightly firmware must pass an automated smoke test before being released, this is to ensure that the basic functionality works correctly. An especially important test is to verify that firmware upgrades work correctly in the latest build.

What are the Smoke Tests

The smoke tests are developed as SqueezePlay Macros. The following tests are run on every nightly build:

The following tests will be added soon:

To run the smoke tests you will need SqueezeCenter, a Squeezebox Player, a Controller and an SD Card. The tests assume that the Controller is associated with a Player.

The tests can be run manually from the Extras > Test macros menu.

For an automated smoke test you will need a host system (these instructions are use a Linux host), SqueezeCenter, a Squeezebox Player, a Controller and an SD Card.

First generate an SSH key pair on the host system. This key will allow you to ssh and scp onto the Controller without a password.

Copy the SSH public key and a squeezeos-post-reset.sh script to the SD Card. This script will be automatically run after a factory reset and will enable the host system to automatically access the Controller.

Edit the Macros.lua script as required, then copy the smoke test macros onto the Controller, and then reboot. The tests will start automatically.

This last step can be repeated as required to re-run the tests. To access the test results the Macros.lua can be copied from the Controller using scp.

Occasionally the format of a given screen might change slightly (e.g., with the addition of a new menu item), and in these cases it is sometimes necessary to create a new reference screenshot for the Smoke Tests to test against.

Often, parts of a given reference screenshot should not be analyzed against the test image. For example, the software update screen lists the version to upgrade to at the bottom of the screen, which will change with each successive version of firmware. The Macro applet allows for sections of a reference screen to be "pinked out". These sections of the screen are removed from the test analysis. 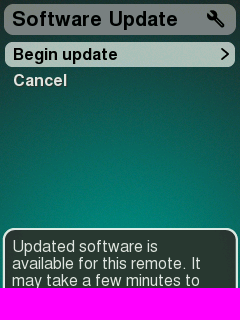