The SqueezePlay source code is available from our public Subversion tree. Pre-packaged downloads are availabe here. To get the best from SqueezePlay, you will need to be running a current SqueezeCenter release. It is recommended you either run a matched version of SqueezeCenter from subversion as well, or run the most recent nightly build. The server code is often updated to better support SqueezeOS, so it's good to keep both SqueezePlay and SqueezeCenter up-to-date.

To build the SqueezePlay software to run on the SqueezeboxController target hardware, see SqueezeOS Build Instructions.

You can visit http://svn.slimdevices.com/viewvc.cgi?root=Jive our Subversion repository with your web browser to browse the source code.

To build the SqueezePlay software to run on your desktop Mac, Windows or Linux system use your local Subversion client to check out the latest version, the following command line can be used:

Where version is the version of code you are interested in running (e.g., 7.2), and branchPath is the branch you want to run. This is typically "trunk", but could also be a feature branch, e.g., "branches/newFeatureX".

Instructions for building and installing SqueezePlay on Windows, OS X and Linux are included with the source code. For trouble shooting Linux builds, see TroubleShootingLinuxBuilds

To run the SqueezePlay application:

Notes on Building SqueezePlay on Ubuntu 12.04

When building on Ubuntu 12.04 and later some patches currently needs to be applied: http://forums.slimdevices.com/showthread.php?97714-Building-amp-running-Squeezeplay-v7-8-trunk-on-Ubuntu-12-04

If you need to modify any autotools config during the course of you coding work (configure.in, Makefile.am), you will need to use the following versions of autotools tools:

There are various ways to make that happen. I (tomw) compiled and installed each of these versions from source. The 'make install' installed the tools into /usr/local/bin. I then put /usr/local/bin in the front of my path when I am compiling squeezeplay.

Notes on Building SqueezePlay on Windows

To compile Squeezeplay with libmad on Windows, download libmad-0.15.1b from:

Unzip it under squeezeplay/src/generated, so that you have the following:

Then the Visual Studio build should work successfully.

SqueezePlay for windows may be built with the free Microsoft compiler VC++ Express. To do so follow the following steps:

Add a path to the directXsdk Include path like so:

Add a path to the directXsdk Library path like so: 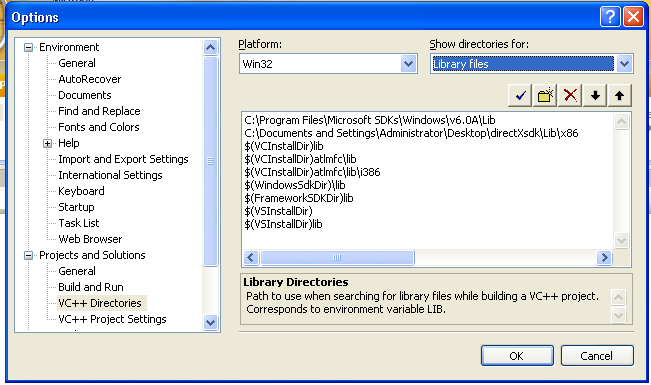 SqueezePlay should now build in VC++ Express by selecting build solution (F7). It can then be run by browsing to the created ouput folder e.g. .\Debug and running squeezeplay.exe.

Building SqueezePlay and Installer With Make