This wiki page serves as the software release notes for SqueezePlay/Squeezebox Controller 7.1 release.

Note that while this document is specific for that platform, many of the changes described below are either all or in part software changes made to the core SqueezeCenter server code to enhance the interaction with the Controller.

If you are a SqueezeCenter user, you should update to 7.1 to take advantage of these features (after updating SC to 7.1, your controller will automatically detect there is new 7.1 firmware to install).

SqueezeNetwork users will receive notification of new Controller firmware to install after SqueezeNetwork servers are updated to 7.1-based code.

There has been general support added to the UI for custom mixers, the most well know of which is probably MusicIP (a core SC plugin). 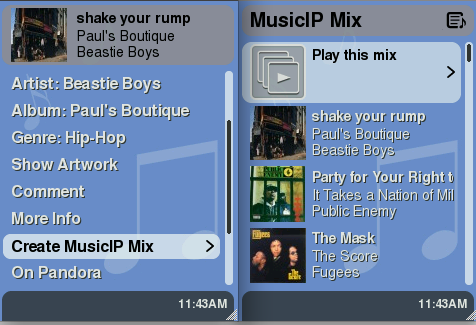 There is a new applet that allows the user to have control over what appears on the top-level "home" menu. Bug 5366

For example, promoting a few music services to the home menu: 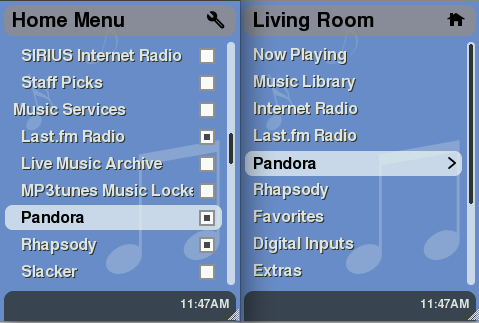 Another example, a greatly reduced home menu for quicker visual access to what a user might want: 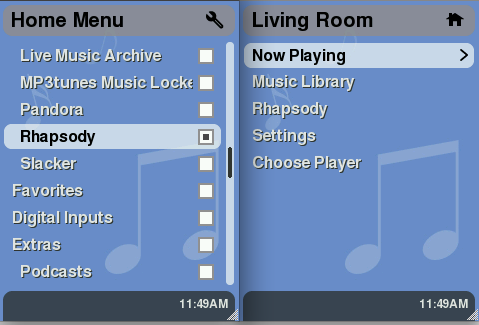 Press-hold on FFW or REW while playing most local music and some remote streams such as podcasts, and a "Song Position" slider will popup. Use the scroll wheel to select the position of the track desired, then hit the center button to go to that position. Shiny! 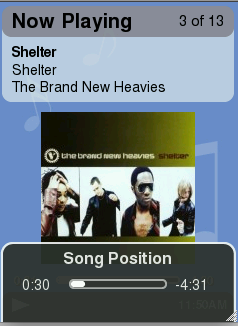 The behavior of the "Now Playing" screensaver has been confusing to many users.

When the Now Playing screensaver is activated, it will now behave as follows:

The Controller now remembers the last Player and Server it was connected to. This allows a WOL packet to be sent to the server when the Controller is turned back on.

A new screensaver, "Screen Off" has been added. This screensaver when activated completely dims the screen and key brightness. 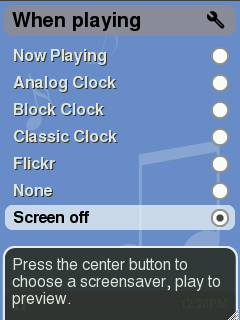 A small icon menu style has been added to assist Plugin developers that want to create menus with icons without sacrificing the number of items that can be displayed on a screen. 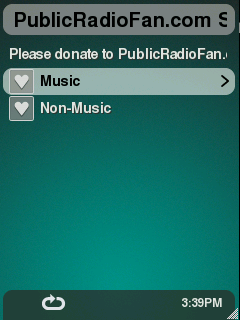 When making a search of either local music or any of our OPML-based services (Rhapsody, Slacker, Live Music Archive, Pandora, Last.fm, etc.), the search is cached for later callback. A "Recent Searches" menu item will appear in both the home menu and the Music Library->Search menu for these.

This is a server-side run time cache, so any cached searches will be wiped clean whenever SqueezeCenter is restarted. 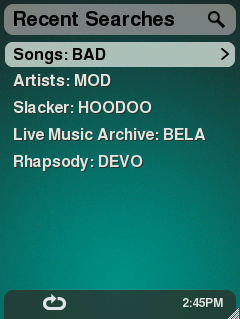 note: this feature still has some growing to do, and will likely change somewhat in scope, placement in the UI, and behavior in coming releases

The menu rendered when descending into the information for a track (e.g., Music Library->Some Artist->Some Album->Some Track or Now Playing->Playlist->Some Track in Playlist) has been completely redesigned.

Icons are now displayed for favorites, be they pointers to Music Services, Internet Radio, or Local Music 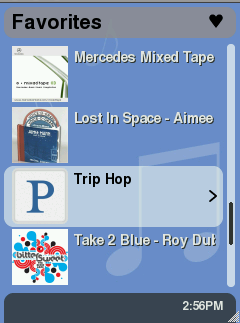 Add-hold to add and play next

Any place where pressing the add key (+) means: add to end of playlist, press-and-hold of the add key means: add as the next item (or items) in the playlist

When browsing to Music Library->Artists->Some Artist, artists with more than one album will also have an "All Songs" item available in the menu. Bug 7439 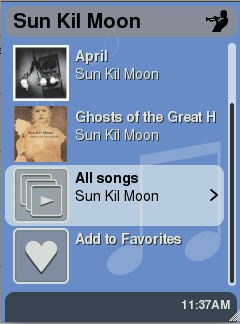 Thanks to community member FredFredrickson for these nice new wallpapers! 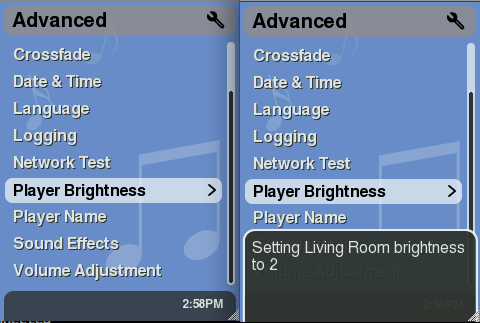 There is a SC user preference that, when set, plays the other tracks in an album when play is hit on that track. This was previously restricted to the Player display (SB1/2/3, Transporter), but now has been extended to also work on the controller. This feature also works to play the selected track and all subsequent tracks when using "Browse Music Folder". Bug 5981 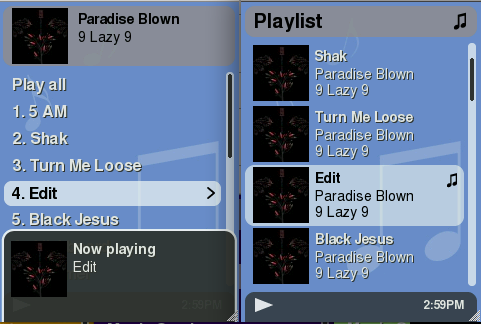 Add Sleep to Settings->Advanced->Power Off Menu

Improvement of Server/Player Connectivity and Recovery

SlimDiscovery was reworked, as was much of the Player, Server, and Network classes to improve reliability and recovery of connections.

Any part of the SqueezePlay Lua code can now register one of their methods as a "service", which can then be subsequently accessed by other parts of the SqueezePlay code. This allows for much easier interaction across applets and jive code.

One example of this code in action is the new Screen Off screensaver, which gets/sets the controller brightness via getBrightness() and setBrightness() services registered from the SqueezeboxJive applet.