This page needs editing. Great content, but dated. Needs to be brought into the modern world of networking.

Network Design for the Squeezebox

The Squeezebox is a device on a home network, just like a PC, laptop or networked printer .

For some new users, adding a Squeezebox may be your first step into multiple-device home networking.

If you've added a second PC to your home network, the process of adding a Squeezebox is identical. 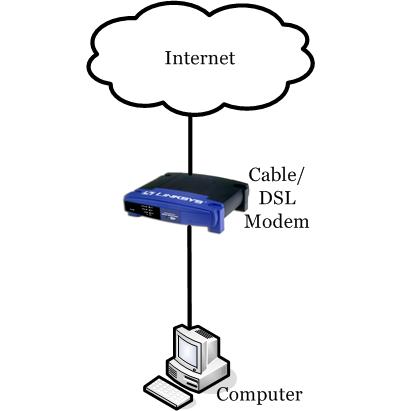 This is the most basic home network of all. If you have broadband Internet service, you likely started out with something like this.

Adding a Squeezebox is equivalent to adding a second computer to the network. If you didn't require Internet access, you could connect your primary computer's network interface card (NIC) directly to the SliMP3/Squeezebox/2/3 using a crossover cable. (The ethernet port in the Squeezebox Receiver is auto-sensing, so a crossover cable is optional here.)

One way to do this is directly through the primary PC. Add a second NIC, wired or wireless, to the PC and enable "Internet Connection Sharing" (ICS). If the NIC is wireless you've created an "ad-hoc" network. 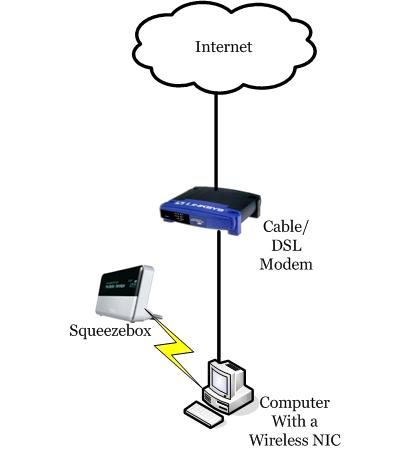 Though this is simple, it doesn't have the security advantages of a router (see below) and it may not be as reliable or as easy to troubleshoot if you have problems.

Note you will not have the bandwidth necessary to use SqueezeNetwork, but if you enable ICS any other devices on the network will have Internet access.

A much better arrangement is to use a router to "split up" the Internet connection. 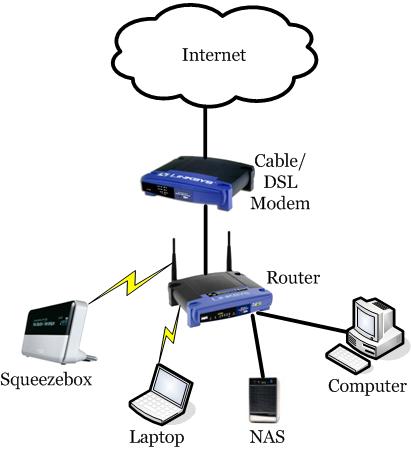 Here your Internet connection is shared among all the devices connected through patch cable or wirelessly to the router. Note most wireless routers also have 4 wired ports. All the devices can see each other as well, sharing files and printers. Note that SqueezeCenter transfers audio data to the Squeezebox much like file sharing. The router can handle networking requirements like DHCP and creates a private network isolated from the Internet yet still able to interact with it. Finally, the router adds a layer of security as most routers have firewalls.

Note in Europe, modem/routers are common, where the modem and router are combined in one device which is usually purchased by the user. In North America, the modem is usually separate and often owned by the ISP.

It's possible to use a network switch or a hub instead of a router. A switch will not have the security of a router and will not have a DHCP server either. You will be relying on your ISP to provide a series of IP addresses for all your internal devices. Each device will be directly connected to the Internet. (Please see discussion concerning the previous two sentences.) A hub adds another significant limitation - while a switch will direct packets to the appropriate device, a hub will echo all packets to all devices and it's up to each device to sort out what is addressed to it. This can lead to congestion. Hubs are effectively obsolete.

However, a switch is useful if you run out of wired ports on your router.

Note you can run the SqueezeCenter software on the desktop PC or the NAS (Network Attached Storage). Running SqueezeCenter on your NAS device means that you can access your own music library without having your computer turned on. You can run SqueezeCenter on a device with a wireless connection, but this creates two wireless hops between SqueezeCenter and the Squeezebox. This may be problematic for some. If you're experiencing problems caused by wireless bandwidth restrictions, always ensure your SqueezeCenter is wired first. This is usually easier anyway, because you'll probably want to keep your router and music library computer of NAS out of the living space anyway. 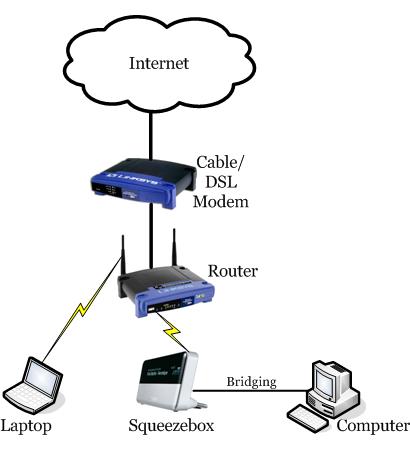 For a Squeezebox Receiver, the procedure is slightly different. Robin Bowes' 'Net-UDAP' utility (described in this forum thread) should be used. 'Net-UDAP' allows the user to remotely configure the network settings for the Receiver, including the bridging feature. Users may find it easier to first configure the Receiver to connect to their wireless network in the normal way (using the Squeezebox Controller), and then use 'Net-UDAP' to simply enable bridging (the existing wireless settings should be retained).

Installing SqueezeCenter on the bridged device may at first seem a little circuitous and convoluted but Slim Devices' CEO and chief Squeezebox designer Sean Adams confirmed it should work well here. The Squeezebox is not merely a simple wireless bridge, it recognizes traffic destined for itself originating on the wired side and will process them. This is an interesting option: the Squeezebox can take advantage of the vast, reliable bandwidth between it and SqueezeCenter offered by the wired ethernet link, yet still have wireless remote access to SqueezeNetwork and the rest of your network.